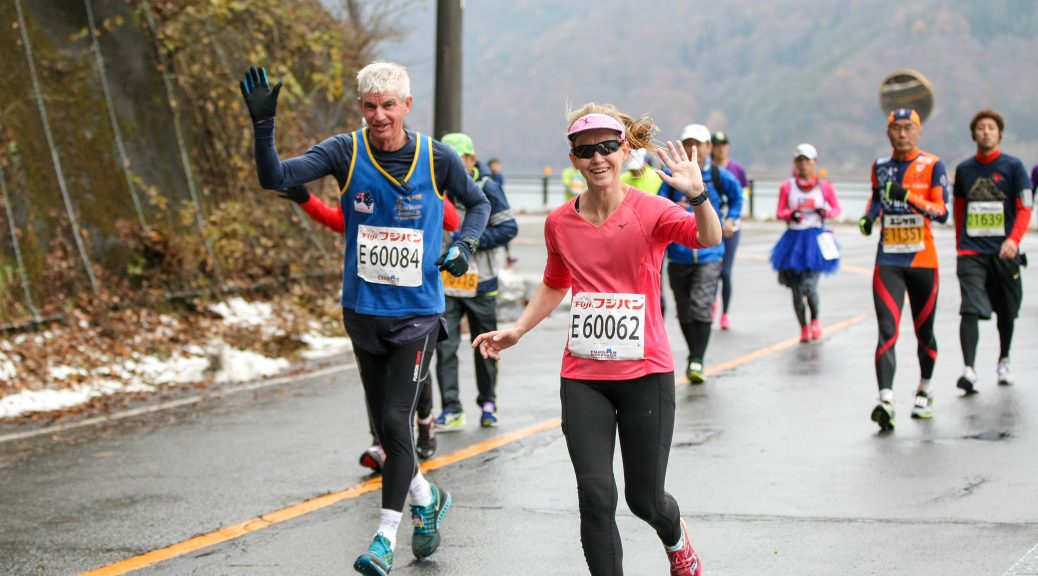 While Kobe eight days earlier had been unseasonably warm, by the Wednesday of Fukuchiyama the cold had returned, and indeed there had been an unseasonable heavy fall of snow in Kawaguchiko. We knew there would be snow on Mt Fuji, but as we bussed into Kawaguchiko on Friday afternoon it was evident there was about 25cm of snow covering the ground, including roadways, although the road ringing the lake had been cleared.

I hate snow. I hate snow because I don’t tolerate the cold at all well and I had such a big taste of the cold, snow and ice in Greenland I’d been determined that was it for me. Then of course I had to suck it up to run in Antarctica. I hadn’t considered a snow event would plague the last marathon in this group of 16!

The forecast was for around seven degrees for Saturday and slightly warmer for race day on Sunday. Sometime early Saturday I looked at the Fujisan marathon Facebook page. There was an update that led with “Decision made. Marathon will go ahead”. I was aghast! Apparently the conditions had been so poor that there had been debate about whether to proceed! Thankfully the race organisers had been able to arrange to clear the roads and it was considered safe enough now for Sunday. I would have been just one of 15000 disappointed runners come Sunday if it had been cancelled and thank goodness it wasn’t as there was no other option for me in Japan to run the 16th marathon with only two days to go to 365 days!

We walked from our hotel to bib collection on the Saturday. I was wearing every piece of clothing I owned and I was still cold! Bib collection was well organised although it became evident that there were two booking agencies and we were initially in the queue for the wrong agency. That corrected we picked up my bib and walked back to the hotel. Once there I realised I’d forgotten to take the Apricot Anne shirt our daughters had made for me, and with that in hand we walked back again in the freezing conditions for a photo. Good parents!

I made sure I ate heaps of rice the night before the marathon but on the morning of the marathon I awoke quite nervous and felt almost unable to eat anything. I forced down some rice but the other 16 dishes of food went back to the kitchen.

We watched runners jogging toward the start from about 7am. Madness! The event started at 9am and around 8:30am we began the trudge along the cycle path, still covered in part in snow. I had spent a lot of time deliberating about whether to wear my usual marathon shoes that let out the sweat and let in the water (and cold and snow); or whether to wear a different, more waterproof pair I’d thrown into the suitcase that have a slightly wider toebox (in case my toe played up) but in which I’d only run about 80km. In the end I went with the former thinking I’d made it fine through rain in Fukuchiyama and I’d just have to make do. I threw a couple of bandaids into a pocket just in case I needed them. En route to the start Craig carried me over some deeper snow drifts!

This marathon had a 10km loop around the town before heading back to the lake and then across the bridge to where Craig had arranged to see me about 12km.

Once again my head was troublesome, letting me know this was hard and maybe I should stop. I came over the bridge with Mt Fuji behind me, waving to the photographers and then to Craig. I stopped running just as he was taking a photo and he made a comment about this that drew my ire. There was a short exchange of something to the effect from him of “suck it up” followed by some expletives from me that perhaps one did not need to know much English to catch the tone, and I ran on.

I sulked for the next 4km before my attention was drawn to a set of portaloos which seemed an opportune time to stop. I knew I had six hours to finish this marathon (less 15 minutes for the time it took to get over the start – they were running on gun time!) and like Fukuchiyama I was travelling along quite well in terms of making this time with ease. But back to the portaloos – I decided this was my moment to get some photos!

Not long after this I met a fellow who was running in a Marathon Maniacs shirt. He was Stuart from America but living in Japan. Stuart told me he does all his training inside on a treadmill and that he was finding the race a little tough. I walked and ran with him for a while however I eventually decided to press on when I spied another man up front who had said hello to us as he passed a little earlier.

The man in front was John from Melbourne. What a relief to hear him speak! Such an easy conversation and humour, and we stayed together from about 20km to the end. It was awesome.

John is a marathon veteran, having run his first marathon at age 24 years, and 44 years on, still going strong. John said he and his wife Tricia had arrived in Japan for him to run the marathon and then they were spending a few weeks touring. He had been to different places around the world to run marathons, including Russia! John’s strategy for Fujisan was to run for 6 minutes and 45 seconds, and then walk for 30-60 seconds. He had a timer set that let him know when to do what, and that’s what we did. By that formula and the pace we were doing I knew we’d be home in 5 hours and 30 minutes, below the cut off. That’s all I wanted – to finish under the time.

The event went right around both lakes. There was one massive hill in the middle on which a drumming band were performing – they were still there drumming away when we came back down.

Facebook had indicated there would be noodles prepared by a Japanese idle group at 25km and 35 km. I thought to myself – “good use of work for the dole recipients, helping with the marathon” but then realised they meant Japanese idol group as in music group! The queues for noodles were crazy at both locations – John and I were stunned to see so many people in lines of maybe 100 metres waiting for noodles, particularly at 35km when those same people should have been getting a wriggle-on to make the finish in time.

The event organisers were setting off fireworks every hour – you could hear them all around the course, and right on six hours they let off the last ones. Event over! I’m sure there were several thousand people behind us who wouldn’t have made the cut off, and it was noodles hand crafted by idols that slowed down hundreds of them!

Anyway I was regaling John with wild stories of things that have happened to me at different events (what happens on the run stays on the run) and he was returning the favour. With 3km to go he started to fade but there was no way I was leaving him. This was the first time he’d taken his phone in case he had to call Tricia to say he was a DNF and getting on the Losers’ Bus, but this was not to be! We came around the final bend and John’s wife called out “Nearly there John”.

Craig was at the finish line on the right just as he said and I called to him as we crossed.

John was thrilled to finish and I was extremely pleased we were done too. I actually felt pretty good and like in Uluru I could have easily kept going. Once again it’s the head and not the body that undermines my performance! John congratulated Craig on being able to put up with me because I talk so much but I’m pretty sure it was tongue in cheek. 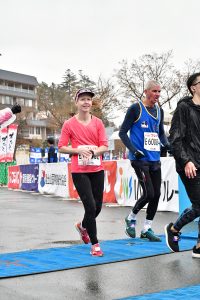 By now I was basking in the glow of having finished the three events and Craig nearly had frostbite.

We walked back to the hotel wearing our rain ponchos and on entering the foyer were accosted by the manager who shooed us back to the tiles with towels in her hand and demanded we take off the wet outer layer! We made it to our room and I came down a little later and managed to purchase a bottle of plum wine (after some issues with translation!). We sat in the room looking out at the lake, half watching the sumo wrestling championship before donning the traditional Japanese lounge-wear and slippers to go back to the dining room to face the 16 course dinner. What an experience!

One thought on “Fujisan Marathon”