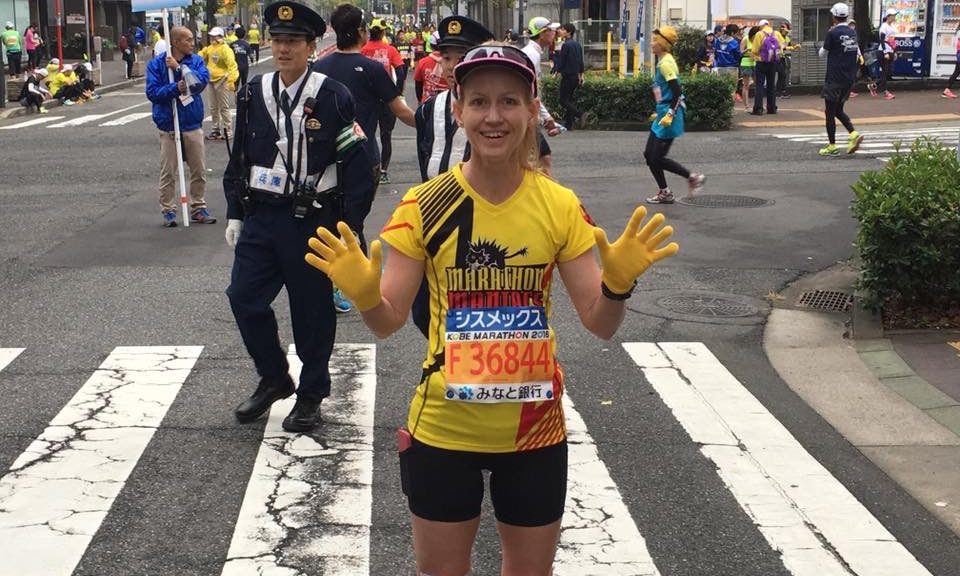 I count myself very lucky to have run Kobe, for a few reasons. Perhaps the major reason is that when I was searching for three marathons to run in one week in different prefectures of Japan, the ballot entry for Kobe was already closed. I contacted the organisers and asked whether I could be on a wait list and they very generously gave me an entry! I was so thrilled.

I’d been working on the issues I’d had with blisters and my right knee since Ross in September, and with some professional advice about taping my knee, I’d decided to give Kobe a go. I knew with a 7hr 30min cutoff I could walk most of it if needed.

Craig and I flew overnight Sydney to Tokyo, and then onto Osaka, landing mid morning the day prior to the marathon. We bussed it to Kobe and found our way to bib pickup, at the finish line of the event. Some instructions were lost in translation and I had no number card, so had to pay about $2.50 for a new one, but no matter. The expo was fabulous and we bought Craig a cap because the forecast was for a high of 21 degrees Celsius, unseasonably warm for late Autumn.

Race morning was fine and sunny, and with a 9am start not far from our hotel, we had breakfast in the club lounge and wandered down. The organisation was phenomenal. Kobe marathon is a big marathon of 20000 runners and about 500000 spectators. I left Craig at a barricade and walked on about three blocks to my gate. I figure there were about 1500 runners in each gate and in mine I saw only one other Caucasian runner. He had in ear buds and looked focussed and not at all chatty, so I stood by myself and soaked it all in.

At bib pickup we had been given bright yellow gloves to wear at the start. There was a lengthy introduction in Japanese followed by a song, and then everyone waved their hands in the air. Such fun even though I didn’t really know what was going on! There was a countdown and then the start – we were off! Or so I thought. It was about 20 minutes later that my group even started to move!

I knew Craig was on the first corner and called to him as I ran past. I’d worn my Marathon Maniacs shirt which is florescent yellow and ordinarily stands out, except the Kobe event shirt was similarly yellow and clearly lots of Japanese don’t bother with the belief that you finish a marathon before you don the shirt.

In the first kilometre or so a man ran up next to me, whipped out his phone and got a selfie with me. I obligingly smiled, and on looking at him more closely realised he was another Marathon Maniac! It was too busy to stop and chat so I kept going, but found later via another Maniac his name is Mike and he lives in Hong Kong. Mike put these photos on the Facebook page of MM and Dan whom I met in Uluru also recognised me.

It’s hard to describe the atmosphere and crowd at this event. Thousands of people lined the streets for almost the entire 42km, and where no crowd was allowed, there were volunteers whose only job was to cheer. There must have been more than a thousand volunteers, all dressed in matching coats and caps.  There were bands, drummers, singers, dancers, and children’s groups performing.

Aid stations were incredible with water and electrolyte drink, as well as food. The electrolyte drink was quite strongly flavoured. I’d grabbed it by mistake initially, but given it was quite hot early on (maybe 18 degrees at the start) I thought it wouldn’t go astray. It was called VAAM.

The crowd of runners was just enormous and didn’t let up for the whole distance. There was never clear space for more than a metre or so in front and I think I ran an additional 500 metres weaving.

Around 17km another man ran up to me. He was a Canadian who has run in different countries and it was nice to talk with someone for a few kilometres. I lost him around 25km when I stopped to use the toilet. I’d noticed I wasn’t feeling great and was experiencing some nasty stomach cramps. I was forced into a walk and felt so off that at one stage I sat down on the median strip. I was pretty devastated when each time I tried to run the cramps returned.

It was a bit of a slog from there. I never thought 12km could drag so badly. I’d been looking forward to running over the red bridge toward the finish and it was still quite a thrill. I managed a really slow jog over the last 3km and ran down the finishing straight so thankful to have made it. Slowest solo marathon ever. Despite this I was really happy to have reached the milestone of 20 marathons.

I researched VAAM a couple of days later. It’s some sort of hornet spit meant to help people burn fat. Enough said. It didn’t agree with me! Not the first time an electrolyte drink has caused me issues. I should have been more careful!

One thought on “Kobe Marathon”