I had in mind to run the Asian continent marathon in a well-developed country where I didn’t have to worry about safety and whether to drink the water. Tokyo was the obvious choice and from the research I did it looked as though foreigners had a pretty good chance at being accepted despite it being a ballot entry. The feedback was the Japanese government was keen to have marathon tourism money coming into the country. The ballot entry was a fairly simple process, and being reasonably confident we’d get it, I booked our flights before the result came out. And sure enough, a month later the emails arrived to say Craig and I had both gotten in!

Since the Australian Outback marathon 2013 event when Craig and I had dropped back from the full distance to the half, Craig had been struggling with running, and searching for an answer. He was diagnosed with arthritis in his right ankle from old injuries, with loss of padding between the ankle bones meaning that whenever he ran, his ankle swelled up to double the size. He underwent some plasma injections; tried orthotics; tried different shoes etc etc, all to no avail. It was going to be line ball whether Craig could run in Tokyo and then not be a cripple for the rest of the trip.

My training continued along really well until one day in January, just four weeks prior to Tokyo. I was embracing interval training and as I leapt into the air in the warm-up, felt a terrible pain in my right calf! I’d torn it, and it was nasty. I was devastated. Over the next few weeks I rested and iced and elevated; and then water cycled and swam at the pool; and finally ran some tentative kilometres. The week we left I ran a few kilometres but that was about it. It was too late to cancel. I was doubly concerned because I was also doing Six Foot Track marathon 8 March, only 12 days after Tokyo.

Tokyo is an amazing city with an outstanding public transport system. Once you understand how it works, it’s not so hard, however getting to that point is tricky! The day before the marathon we navigated our way from our hotel to the Tokyo Big Sight for bib collection. That was quite a feat. The marathon expo was the biggest I’ve ever seen. The individual exhibitors stood at the front of their stalls yelling to runners to come to their exhibits. I couldn’t understand a word they were saying and the noise was quite overwhelming. I did buy a lovely long sleeved running top as it was winter in Tokyo – in fact it had snowed the day before we arrived. Funny, in Australia I take the smallest size in everything – in Japan I think I ended up in a Medium! In a queue for the bathroom I was a head taller than the Japanese ladies – here I’m one of the smaller people! It was all very amazing. 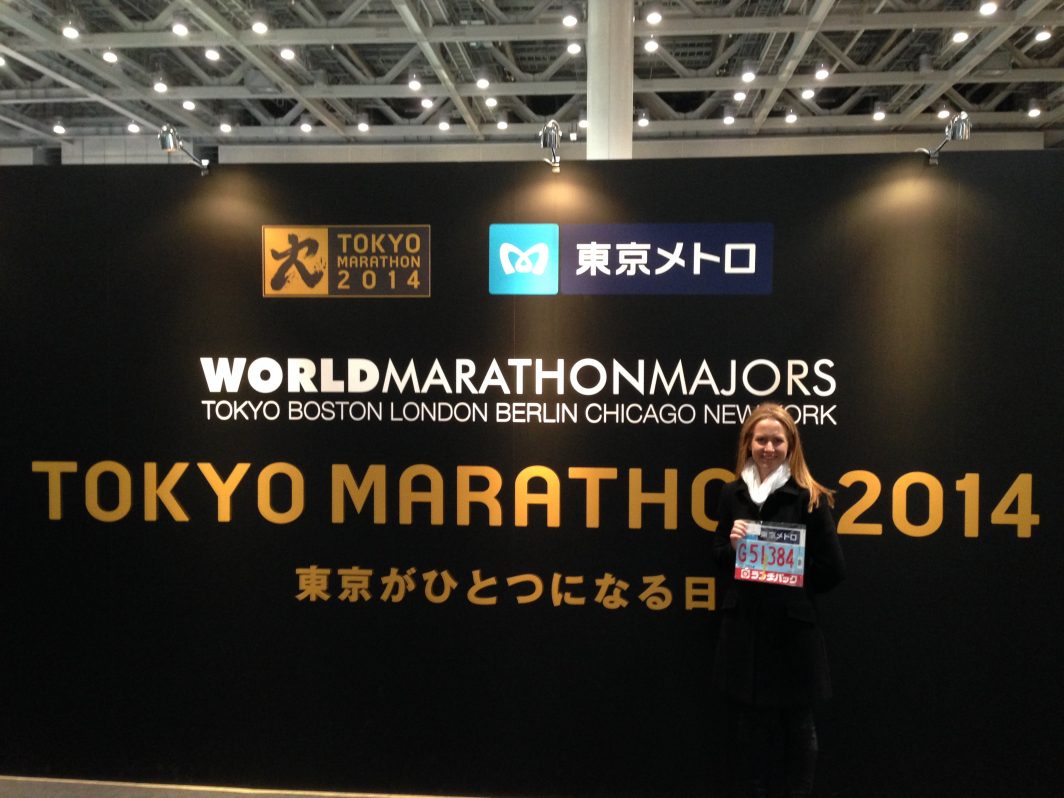 We stayed at the Tokyo Hilton, across the road from the start line. The morning of the event we simply walked across the road and found the gate I had to enter, and from there Craig was able to walk up the footpath to get near enough to wave to me. He tried to get a little closer but the security guards spoke sharply to him and showed their batons! I’ve read since that security is even tougher now – you can’t take any liquids onto the course and go through a metal detector to enter your area.

Of course Craig had his entry still and even some running gear. He came close to having a go, but sense got the better of him. He was talking to another man at the start who said his wife had gained an entry but he had missed out. Craig immediately offered him his own entry, but the fellow declined.

So I stood in my corral with several hundred others. People were talking but not in English. I spied one other girl who, like me, stood out as being taller. We smiled and started to speak – she was from Venezuela and in broken English we had a lovely chat. She was finishing her last World Major!

From the time the anthem was sung and the event commenced it was about 17 minutes before our corral began to move. It was quite cold and we started in long sleeved throw-away tops. I think I got to about 5km and then put it in a bin. 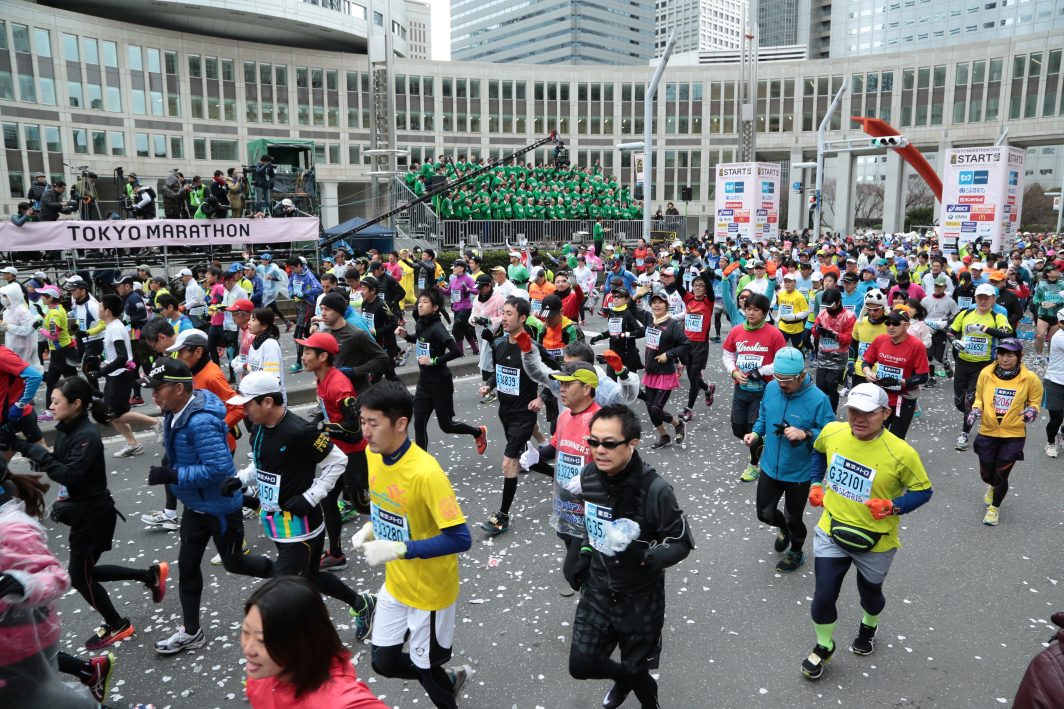 So many people. This was near the start. I’m in there somewhere but it’s a Where’s Wally photo!

The crowd was massive and so many people were in fancy dress! Turns out Japanese people love marathons, and they love fancy dress at marathons! I saw multitudes of costumes including one guy who ran the whole way barefoot dressed as Jesus, with a cross on his back. 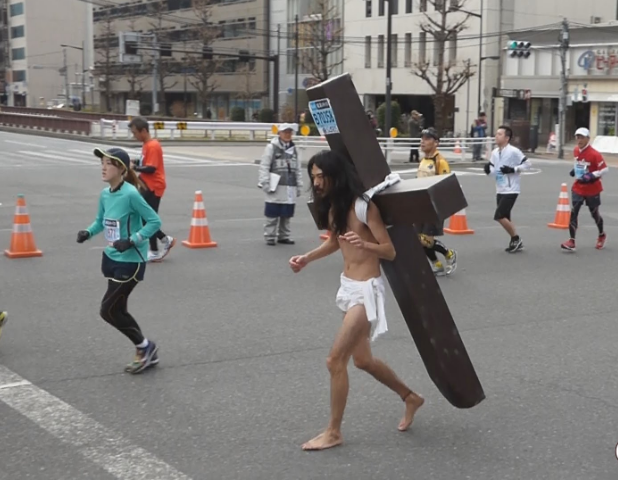 The noise was deafening and this continued for most of the course. While I had some music to play along the way I ended up with the ear buds in and no music which dampened things down a bit! The next day we asked a fellow what the crowd was yelling a lot of the time, and he said it translated into something like “have faith have courage”. At the same time while I was near the Jesus styled runner, the crowd just screamed “Jesus, Jesus” over and over again! 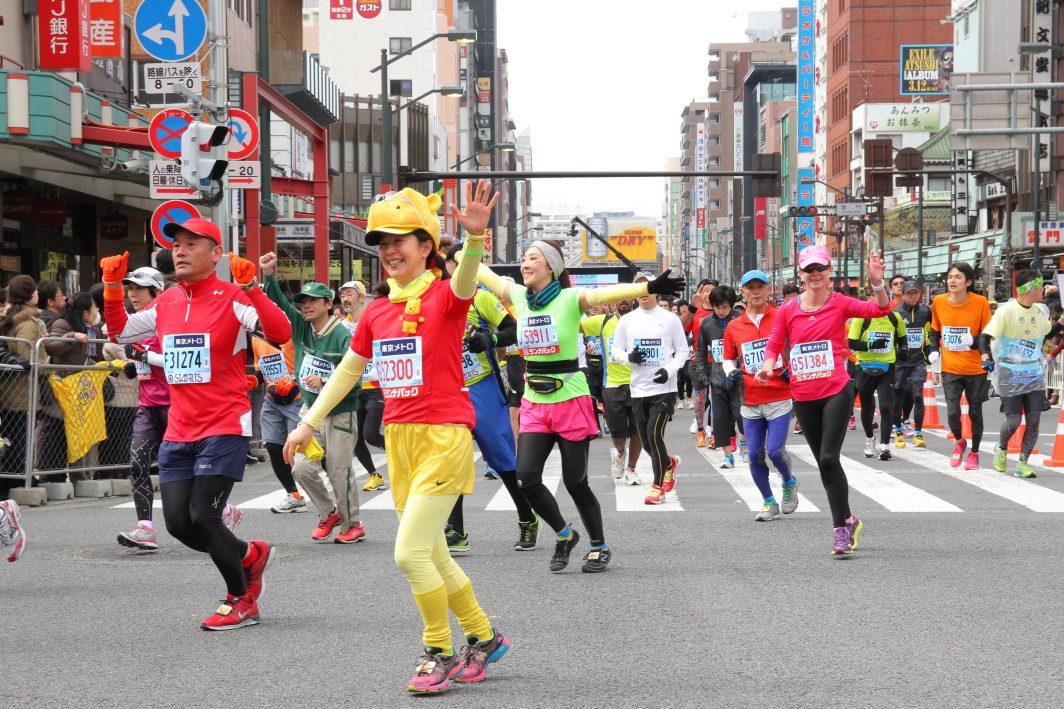 I hadn’t done a lot of research and got quite confused on the course because I thought we kept seeing the same buildings but thought that was silly. At the end my Strava map showed we’d actually run four arms of a cross shape, coming back to the centre each time so I wasn’t as silly as I thought! I’m thinking that much of the crowd was in the couple of kilometres around the intersection of the cross and they were seeing the same runners and encouraging them at each leg. There was also heaps of food provided by the spectators, on top of the aid stations that were themselves top notch. Even the photographers had signs in advance that you were coming toward them. 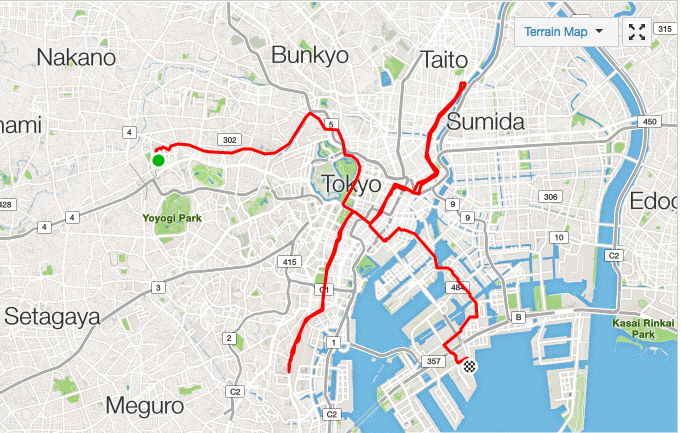 So my right calf was OK. I was pretty tentative and terrified I’d tear it again. I think this meant I changed my gait, as about 17km the top of my left leg, probably the adductor or something else near that, started to hurt. I mean really hurt. I slowed down by about 30 sec per kilometre and sadly it was all a bit downhill from there. I walked parts of most kilometres from that point, and finished in just over five hours. 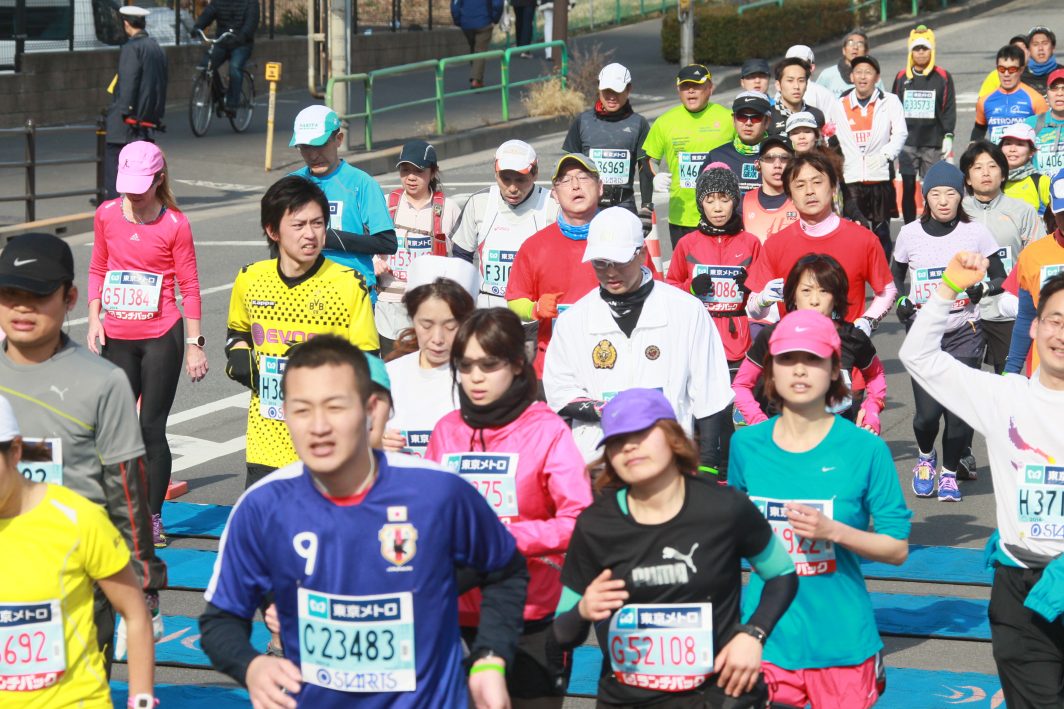 Lots of faces of pain. Mine is under my hat!

One standout from this event was this was the last marathon in which I have ever cried. I saw the pictures of me after and thought about how helpful it was to cry – it wasn’t – and how those photos will forever be tainted by me crying and not having a go at enjoying myself. Sure it was painful and sure it was long, but it was Japan and how may people get to run in Japan! 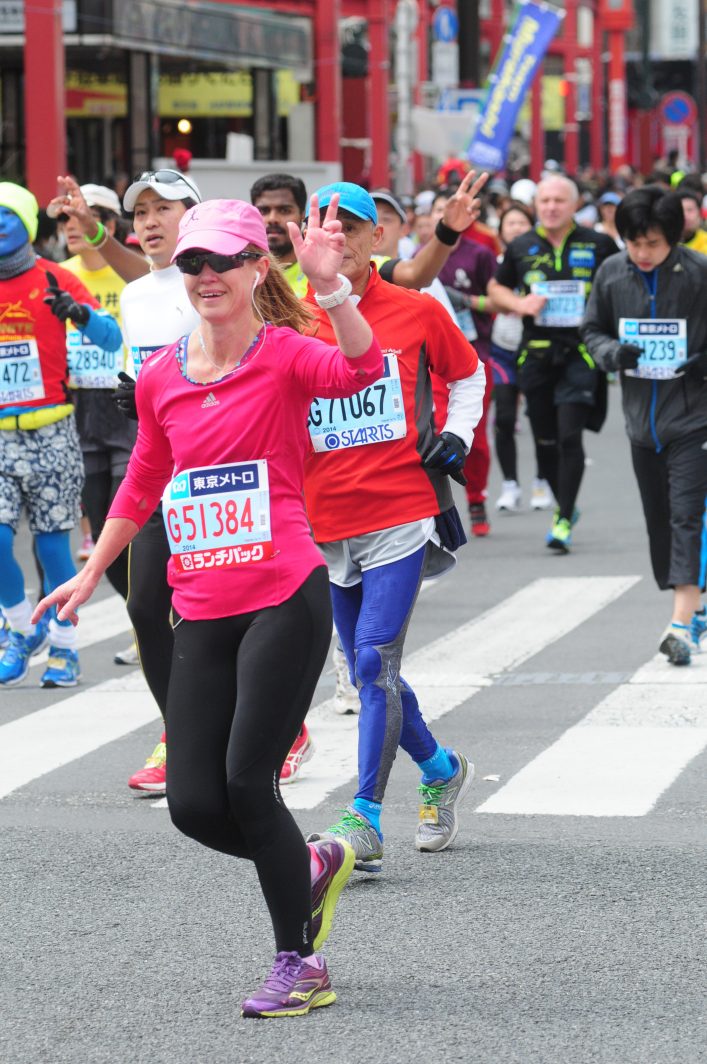 Yep, that’s one of the crying photos! 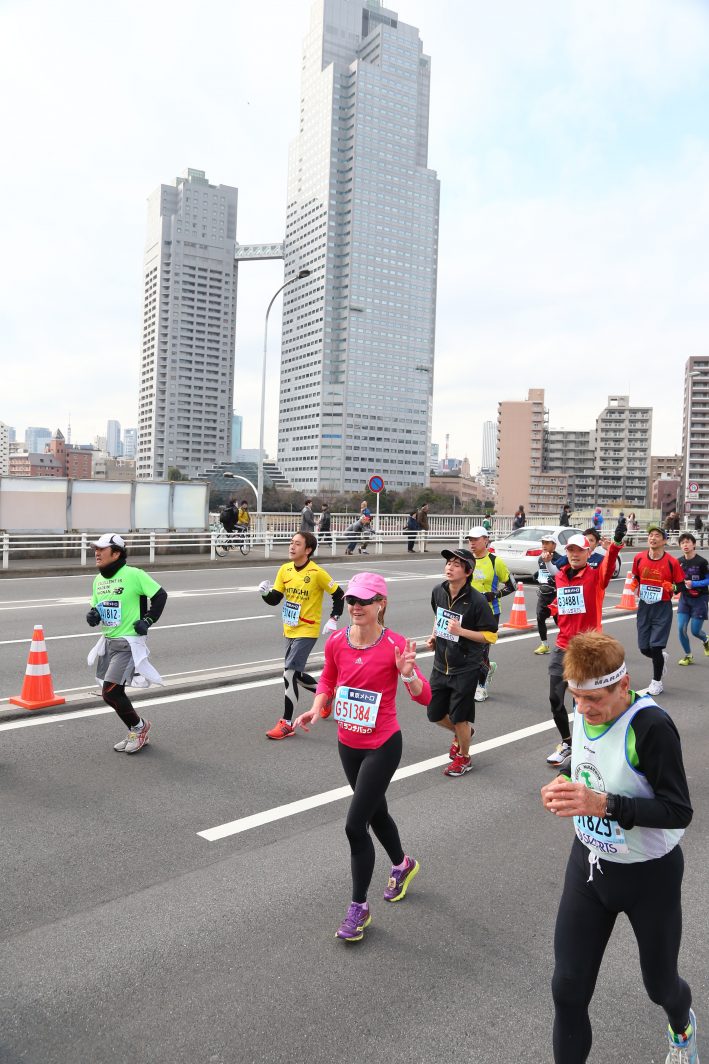 Last 5km. Lots of people were walking by then and heaps had stopped!

After all my talk in this post about being taller than the Japanese ladies, I must say the funniest thing I did see all day was in the finishing chute. I ran (or staggered!) down the chute, hoping I’d see Craig who had had to navigate his way back to the Big Sight all by himself. He was not to be missed. Craig is 6ft 5in……everyone else was not even at his chest height. Ridiculously taller than every other spectator, I could see him and smiled and waved! 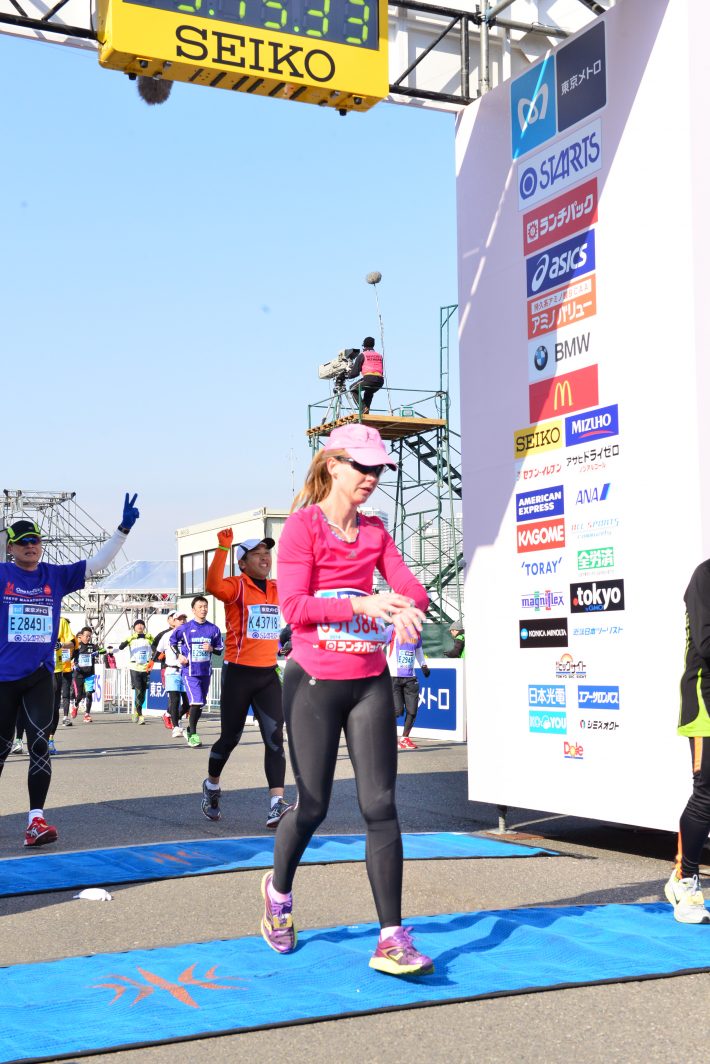 The finisher area was awesome. So much stuff. A towel! I found Craig and we headed off to go back to the Hilton. In retrospect we should have caught a taxi as trekking back to the station and changing trains and then walking another kilometre underground at the Hilton was nearly too much for me, but we did it. We moseyed straight up to the executive lounge where Craig partook in champagne and canapés, and I drank chocolate milk, my go-to post marathon food. It was bliss.

So my thought is the Tokyo marathon is an exceptional event with fantastic organisation, I guess as one might expect for a World Major. I’ve not been to any other World Major and thought Tokyo was very impressive.  The photos from the event were at a really reasonable price and the package contained over 200 photos! The other wonderful thing about Tokyo is despite the season being opposite to here in Australia, the time zone is almost identical, which takes away the jetlag aspect of most other travel for marathons.